I’ve been out of town and before I left I had been working pretty diligently on a project. Working this hard and intently too takes me away from a few birds of prey (11 to be exact) that I hold very dear to my heart. Well, here it is a few days after I’ve returned from being gone and couldn’t wait to get out and see these guys. I went running to each mew and said my individual greeting that I do to each one to make sure they know it is me. Then I saw my dear Willy…..

Willoughby is the most beautiful of the amazing wonder world of Turkey Vultures. I saw her perched there in all her glory and pointed right at her and said “How’s my dear Willy?” as a tear of excitement welled in the corners of my eyes. I can’t help it. Few things move me to tears of excitement and the birds do this and very well.
So in to her enclosure I went. She so looks forward to her training time. She gets so excited and is so eager to perform. She loves the interaction. I haven’t been there in two weeks and this girl didn’t miss a beat. I opened her door and out went her wings. Something I started training her a few weeks ago. I would love to put that on cue to “So Willy, how big was that fish I caught?” and have her do her full extended wing stance. We’re almost there.
I cued her to the glove. Bam, she was on it. I cued her back to her perch. Bam, she was on it! I walked faster while cueing her to the glove. Bam, no surprise she was on it. I lowered her in front of her scale perch. Bam, on it like I never left. I stood up and cued her at a sharp upward incline to my glove. Bam, she was on it and even waiting in anticipation of my next move. She was ready before I was. She stood on the wrist of my glove as I raised her above my head and asked her to wait. She did. She looked at me as I asked her to wait a little more. She did it like
the pro she is.
I said “Good” and cued her to her perch. Bam, she was on it and I was right in front of her delivering her food the way she likes it, deep inside my glove. I’m just totally amazed by the intelligence and beauty of everyone of these amazing creatures in which I work. Tears came back to my eyes as she foraged through my glove and the smile was so big on my face I was having a hard time seeing over my cheeks. “I sure did miss you my dear Willy!”
Our intentional training session was over, but the fun was just beginning. I decided to 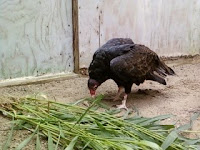 pull some weeds and she decided to watch. Actually she came down and inspected what I was doing. She tugged at the few of the roots as I pulled them. I put all the weeds into a pile and she then decided to take on the task of making a mess of the pile. How very Turkey Vulture of her. I put the weeds back into a pile and she pulled everything out of the pile once again. She does this when we clean her mew too. She’s not one for having everything in organized piles. The items, even the rotting ones have their special places and those place are not in a pile! How I will never make that mistake again.
I needed to gather this mess back into a pile and get rid of it. I wondered how I was going to get away with this. I then cued her to the top of her carrier, of which she was once horrified. Boy if the sunshine wasn’t on my side today. Anyone who knows Turkey Vultures will understand exactly what happened next. I cued her and she flew to the top of the carrier and at the top of the carrier was a lovely ray of sunshine. Willy struck a pose! Boom, sunshine and the wings
went out. Like a vampire wilts in the sunshine, a Turkey Vulture beams in rays of sunshine. Stopped her dead in her tracks it did and out the door I snuck with a pile of weeds. That one wasn’t even planned, but it was noted.
I walked back into her mew to find her waiting for me and in anticipation of our next adventure. Off to the other side of her carrier it was to pull more weeds. She hopped down looking for another pile to root through. Wasn’t long and she had my pile all over the place. Hey, she enjoys it so more piles I’ll make for her. All of a sudden something moved in front of me. She saw it too! She jumped and looked up at me almost as if to see if it was safe to stay. “Willy look!” I said as I pointed to a small toad that was hiding in the grass. I pointed to it and she came over in curiosity. She’s so hilarious with new things because she so afraid of everything. She came in closer for another look but very cautious

at the same time. All of a sudden another one jumped from behind the other pile of weeds. Willy must have jumped a mile high! She wapped me right in the head with one of her wings and she began hopping about is if not knowing what to do. I started laughing and telling her it was alright while trying to focus on not licking my lips because her wing feathers brushed right across my lips. I all of a sudden had this urge to lick my lips and couldn’t get it out of my head. Why does that always happen?

Anyway, back to Willy. She brought her wings back in and her hop now reduced to “the cautious Turkey Vulture stance”. Sorry, I didn’t get a photo of this one but will. I was chuckling under my breath as she walked closer and closer ever so carefully of the almighty and ferocious 1″ toad. Oh I’m sorry, I forgot. There were two of them and I think they were attempting to gang up on her. Still chuckling I took the end of my gloved index finger and pushed behind one of the toad. It hopped and so did Willy. She glanced back up at me and I
said “Your such a good girl for being so brave.” She came closer. I moved my glove toward the toad again. I saw the intensity in her focusing on the toad so I pulled my hand back and said “Good girl Willy.” Now she walked closer with more bravado. I give her credit. She got right in front of it. You see the wings in position to
go out just incase the toad decides to bear its fangs. She investigated about a whole 10 seconds before something entered my head. I thought, “If that toad jumps I can just imagine the vision of the exorcist with a spinning head and a projectile vomiting Turkey Vulture 2 feet in front of my face.” I slowly stood up and told her what a good girl she was as I tapped the ground beside me for her to back up. She actually looked quite relieved. She had a “I told that toad” stance to her once she increased the distance from it to about 5 feet. She managed to then attack and kill the glove. “Yea, there ya go Willy! Kill that glove! You sure
showed it. Good thing that toad decided to run, huh?”
We played with the weed piles for about 5 more minutes before Willy had decided that was enough nonsense. Afterall, Turkey Vultures have things of more importance that need tended to, like striking a pose, and off she went.
It’s good to be back. It’s good to be with and training the birds again. When the training is associated with positive consequences, their body language tells you “Welcome back”.

Scroll Back to Top
0
Your Cart